This morning, sometime just past 6 am, we buried our kitty, Commadus, better known as Comma. We called him the “puppy-cat”, because he was more like a happy, playful puppy than he was ever like a cat.

He was somewhere near 16 years old. I adopted him and his brother, Maximus, as kittens while I was in college. Max passed from illness when he was only about 3 years old, but Comma has been with me ever since, and always did his best to coexist peacefully with our third cat, Little B (you can guess what the B stands for).

He was an exceptionally snugly cat who loved hugs and being carried. He was the perfect cat for a growing child; patient to a fault, and wouldn’t hurt a fly. He was our “buddy”.

He was always following Adrianna around, especially when she had food. He’d paw at Jason’s face to wake him up in the morning, and reach out to snatch my hands whenever I was trying to get ready in the washroom. He loved his cat laser, and would show his ferocious side whenever we sprayed a toy mouse with catnip. He was a wuss to the n’th degree; he’d sometimes come out on the back porch with us, but would get spooked and run inside if the wind blew the wrong way. He loved to curl up on top of any of us if we were sitting in the living room. Sometimes he’d try to sneak into our beds. 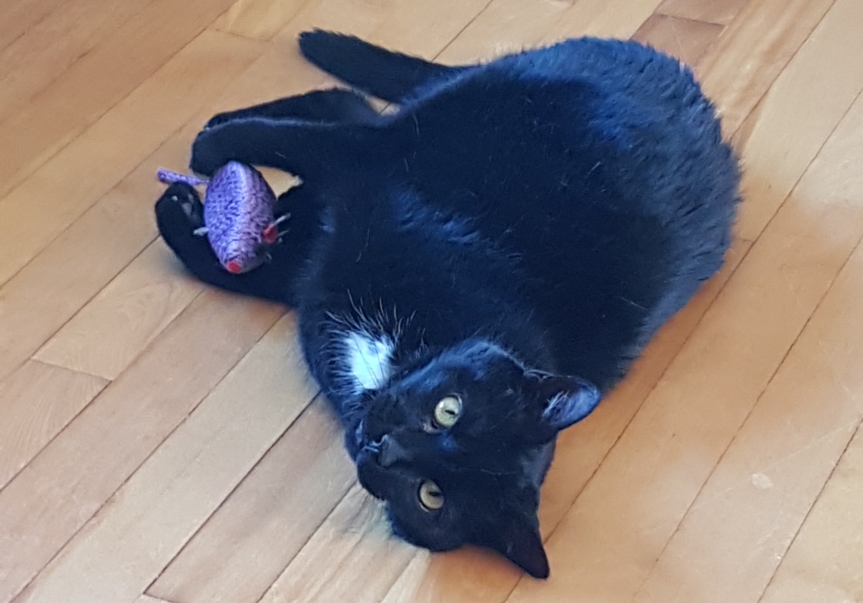 He was Jason’s fuzzy buddy. He was my fur-baby. He was Adrianna’s best friend.

A few days ago he started acting strange; slower, less enthusiastic, and was eating very little. By Saturday night he wasn’t eating anything at all, and I suspected what was coming. By the time I’d left for work Sunday afternoon, he was curling up in hiding places – behind the couch, under our bed – and we were confident it was time. Jason pulled through by giving Adrianna a talk about what was happening. It had to be incredibly hard for him, but I’m glad he did it because I know I wouldn’t have been able to without breaking, and it was better that she had some kind of warning.

When I got home from work late last night, he was under the bottom edge of our bed. He wiggled out enough to let me pet him, but I could tell he had no energy and it was too much for him to even keep his head up for long. I laid with him for a while, and Jason sat with him for a while, but after a time he started slinking deeper under the bed, so Jason slid a blanket under for him, hoping he’d rest on that.

At around 5:30 am, Adrianna came into our room and snuggled under our blankets. I’d swear Comma was waiting for this moment for us to all be together, because no sooner did Adrianna start talking to me, than he began to yowl. We all jumped out of bed to check on him. He’d laid on the blanket Jason had left him, so we slid him out, and as he let out his last few breaths we all petted him and told him we loved him, and then he was gone.

I’d be lying if I said I was fine. I know that he was old, he had a good life, and he had to go sometime. And I’m grateful for the fact that he was able to hang on until we were all there together with him. But I also feel a hole inside knowing that he’s not going to peek in the shower at me, or sook me for literally everything I cook, or wake Jason up with swats to the face, or snuggle with Adrianna inside the laundry basket. For a little creature that took up less room than a pillow, the house feels ridiculously empty without him.

We’ll miss you, puppy-cat. You’ve left a paw-shaped hole in our hearts, but we’ll never forget you.

One thought on “Saying Goodbye to Our “Puppy-Cat””