So here’s the story, lovely people: in a few days I’m going to be turning 34! I think… I’ve hit that time in my life when it starts to become way more difficult than you might think to remember how old you are. Don’t judge me. I’m an old lady now.

Anyway, for my birthday wish this year, all I really want is for people to be reading my books! So, in order to facilitate the convincing of people to read said books, I’ve decided to put on a sale! For the remainder of April, both of my novels are going to be only $0.99 US on Kindle! You can find them on Amazon.com by clicking on the image below, or you can search “Tracey Tobin” on your country’s Amazon site and they should be the first options to pop up in the results. 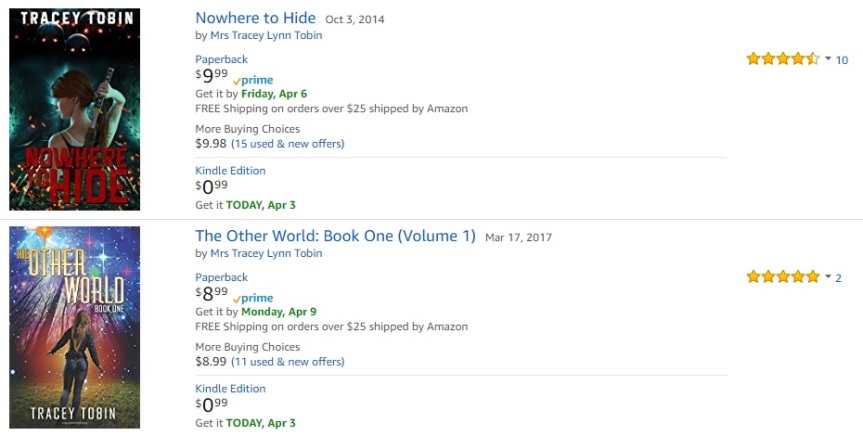 Make my day (and yours!) by picking up two novels for less than the price of a large coffee. You know you want to! *kissy face* ^_~

The other night Jason and I watched a movie. In order to protect you from spoilers, I won’t tell you what the movie was, but suffice it to say that a rather large number of characters died throughout its run-time. These deaths got me thinking… You see, I watch a lot of movies, a lot of TV shows and animated features, read a lot of books and comics, and…well, you get the idea. Thus, I see/read/experience a lot of fictional death, and what I’ve found is that, while I’m fairly desensitized to it at this point, there are certain manners, methods, and situations which cause a fictional death to become extraordinarily uncomfortable to me. As a writer these little details intrigue me, because, depending on the piece, I might actually aspire to infuse those uncomfortable feelings in others. So I thought I’d write this little list of those types of deaths and why they bother me so.

Uncomfortable Death #1: The person who (reasonably) didn’t even want to be there.

This is a common one in action adventure movies – think things like Jurassic Park. There is often a character who is a bit of a wuss, who doesn’t want to follow the group into the grand adventure, who is actually pretty reasonable when you really think about it. But for whatever reason this character ends up going on the adventure anyway, is terrified the entire time, and then just when he/she is in a fairly comfortable spot and feels confident that everything is going to be okay…they get eaten. Or ripped literally limb from limb. Or crushed from the bottom half so that their brain stays alert for a few moments. And they almost always die shrieking in fear and agony. And that’s what makes it so uncomfortable for me, I think. Just the thought of this poor fool who shouldn’t have even been there, and was even actually smart enough to know that they shouldn’t have been there, dies in horrifying pain and terror, freaks me out. I think it’s because I can imagine myself in that situation. I imagine that I would be the person who didn’t want to go, but got dragged along anyway, and paid the ultimate price for it.

Uncomfortable Death #2: The person who tries (and miserably fails) to be a sacrifice for their friends.

A sacrifice scene can be an extremely emotional moment in a movie. The monster is coming, the group isn’t going to get away, so this character turns around, weapon in hand, ready to die in order to afford their friends a few extra moments to run for their lives. It’s tense, and sad, and we’re meant to develop a strong sense of respect for the character… And then the character gets swatted away like a fly and dies horribly without accomplishing a damn thing. Half the time the death even ends up coming off as a little comical, as the character’s body ragdolls through the sky. It makes me uncomfortable because I hate the sudden change in tone. Working up to that moment I feel a mixture of sadness and respect for this character and then their death turns out to equate to something like a pie in the face. That bothers me. Quite a lot, actually. I don’t like having my emotions played with, is the thing, and that’s what this kind of death feels like to me.

Uncomfortable Death #3: The sniveling worm who you want to die, but then does so in the most pathetic manner possible.

At the risk of sounding repetitive, please think about Jurassic Park again (and if you somehow have managed to avoid seeing Jurassic Park for all these years…spoilers, I guess? Go watch the movie, dammit). Think about the lawyer in Jurassic Park. That guy was a sniveling, skeezy, creep, and don’t you dare say for a second that you weren’t rooting for him to get eaten. But the thing is, when he does, doesn’t it make you feel a little like bugs are crawling around in your skin? Maybe it’s just me, but when a sniveling character like that lawyer dies cowering, crying, snot running down his face, practically crying for his mommy…I don’t know. For some reason that makes my skin crawl. I hate the character, but I also feel a little bad for them and wish that they could just show a grain of bravery in the last seconds of their life, and that combination of feelings gives me gooseflesh. Maybe I’m just crazy.

Uncomfortable Death #4: Any child death in which the body is destroyed beyond any chance of recognition.

I’m sure that a child’s death, for a lot of people, is uncomfortable enough as it is, and I’m definitely a bit more sensitive to them since having my own child, but in general fictional child deaths don’t really bother me any more than fictional adult deaths – it really depends on the individual character rather than their age. But with that said, child deaths in which the body is absolutely destroyed…those wig me the hell out. A specific one I always think about is from one of the Final Destination movies. (Spoilers for an extremely old movie again!) The character is practically a teen, but still counts in this case, and he’s killed by a falling pane of some kind of heavy duty glass that literally liquefies his body. There’s nothing left except a pile of mush oozing out his clothing. And although the special effects haven’t held up the greatest and the way his body folds in half backward actually looks a bit comical now, that death freaks me the hell out every time. There’s just something about there not being a body left behind that bothers me in a way I can’t explain. But it’s only with children. If an adult gets vaporized or blown into literal confetti, it’s not a big deal. A child? No no no no no, I don’t like it, I don’t want it, make it go away. Maybe it has something to do with the fact that a grown adult leaves behind a legacy, so it doesn’t seem to be a big deal if there’s no physical remnant left behind, whereas a child has yet to have left their mark on the world, so I feel like taking their physical presence away as well is extra horrifying.

So those are four types of deaths that regularly happen in fiction and bother me a great deal for a number of (both definite and possible) reasons. What do you think? Do you agree with my thoughts? Have any examples of your own? Please feel free to share!