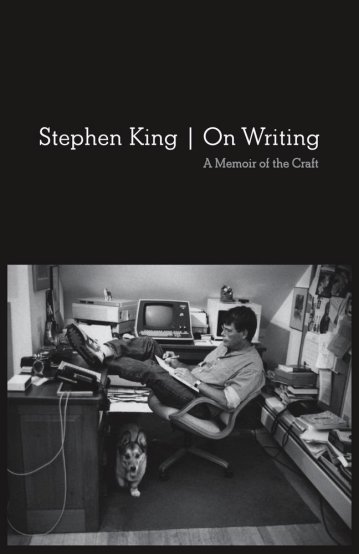 On Writing – A Memoir of the Craft is Stephen King’s foray into sharing his knowledge of writing and encouraging the next generation of writers with what he has learned, the mistakes he has made, and the tips and tricks he’s picked up throughout his life.

Let me start this review by stating that I am not personally a fan of craft books. I’ve read a few of them, and I’ve found, overwhelmingly, that they’re full of stuck-up, preachy “advice” about how you NEVER do this, and ALWAYS do that. Those other books I’ve read were full of demands from snobbish writers who believe that one can only become a writer if one follows a set, precise roster of dedicated rules that must never change. This, of course, is complete bullshit, and Stephen King knows it.

But I’m getting ahead of myself. Let’s back up a tad.

Despite my dislike of the previous craft books I’ve read, I decided to pick up On Writing because I’d heard a ton of good things from fellow writers. Additionally, King is one of my favorite writers of all time, so I hoped that he would have something interesting to tell me.

I was surprised to find that the book does not jump right into writing rules and well-meaning advice, but actually begins with a bit of an autobiography. In chapter-like chunks of varying sizes, King tells us about his life growing up and how these moments, in one way or another, created the writer we know today. This section takes up nearly half of the overall book, and I’ll admit that if I’d know this before buying the book, I might have reconsidered. I was looking for writing advice, after all, not a life story. However, having been glued to the pages throughout the entirety of the autobiographical section, I now implore any prospective readers to not let this deter you. To be perfectly blunt, reading about King’s life, different trials and tribulations, and all the little moments that made him the writer he is, was infinitely more interesting and useful information than any of the tripe in the other craft books I’ve read. There were little, simple lessons he learned from people he’s worked with, family moments that changed how he looked at things, personal struggles he had to deal with and how his writing was affected as a result, and much more. It reads a bit like a stream-of-consciousness project, with King occasionally wandering off on tangents that seem totally irrelevant, but everything manages to come together in sweeps and waves, and eventually we come out on the other end having knowledge we might never have otherwise gained unless we happened to live a very similar life (which, obviously, is unlikely).

The second half of the book is where the specific advice comes into play, though this section still isn’t drawn out in the way other craft books are. While King is now giving his opinions on what we need in our writing “tool box”, what steps we should take when deciding to become a writer, and what changes we should make in our lives to facilitate that decision, it’s all still written in a kind of autobiographical way. King explains his advice by comparing it to his own life and his own experiences, and in my opinion that makes it all seem much more worth while, somehow. There’s something more convincing about advice garnered through personal experience as compared to advice that came from a university course the giver took from a professor who’s never written an actual book in his/her life.

The advice itself varies from the simple and obvious (understand your language, your grammar, etc), to the more involved (adverbs have their place but should be used very sparingly), to the “yeah that makes sense” (read a lot; TV is the devil). I was pleasantly surprised, myself, to realize that the overwhelming majority of what King was saying made perfect sense to me. Instead of screaming at me that you can NEVER do this in a book, and if you don’t do THIS and THIS you’re a worthless amateur, King gives a ton of actual, meaningful, reasonable advice. One of the lines from the book that really resonated with me in particular was, “If you don’t have time to read, you don’t have time to write.” In this King is so right, and this is something I myself have been neglecting in a terrible way. So I’ve recommitted myself to reading more – as much as possible, in fact – and if this is the only thing I’ve gained from reading On Writing (it isn’t) then I’ll happily say that the book was well worth reading.

Something else that I have to mention, though: what I loved most about this book is that King understands writing and writers. While so many other craft books shove lists of rules down your throat, nearly everything King offers up is a suggestion. He mentions a number of things that he personally feels are very important, hard-and-fast kinds of rules, but at the same time regularly admits that something will work for one writer but not for another. He understands that writing is fluid, changing shape depending on the container it is being poured from and into. In this way he gives us the tools, but admits that sometimes a rock can work as well as a hammer. For this reason alone, I am quite happy that I decided to purchase and read On Writing. In a world of veteran writers with their noses in the air, it was extremely refreshing to read the advice of a very successful novelist who realizes that his words may be everything to you, and may be nothing. That, in itself, is an exceptional lesson.

So would I suggest this book to the fledgling writer? Of course! In fact, I would suggest it even to the established writer, because the fact is that we all have something to learn, and sometimes the lesson is to relax a bit and figure out what works for you.

Want to check out On Writing: A Memoir of the Craft for yourself? Click right here to order!
Already read it? Feel free to share your own thoughts in the comment section below!

Shoo! I don’t need your negativity!

I mentioned last month that I wasn’t really doing a “TBR” because I already had too much left to catch up on that I’d failed to read in previous months’ TBR’s. Well, I continued my failing streak by reading exactly none of the books I was behind on during May! Look at me go!

With that said, May was a horrible month for me for a number of reasons, and all that’s to be done is to move forward. So I’m giving myself a really small, simple goal this month. I’m going to finish reading Stephen King’s On Writing. It really shouldn’t be difficult, because I’m halfway through it already. And if I manage that, I’ll move on to the next thing, but for the sake of just saying I have a TBR for June, there it is: that one book. Wish me luck.

Whoops! I seem to have gotten a little behind with my TBRs! Fancy that…who would have thought that I would ever get behind on any goals? *cough cough*

I’m not exactly deep in an inescapable hole or anything, but I definitely feel I should preface this post with the fact that I still haven’t finished A Clockwork Orange (not because I’m not enjoying it, but simply because I haven’t had a good chunk of time to sit down and read a novel lately), and I never actually got a chance to even start the Buffy the Vampire Slayer Season 8 comics yet, so in addition to the following to-be-reads, note that I’ll be trying to get through these two during March as well. Please also note that my review of the Tomie deluxe edition from last month’s TBR will be coming soon.

So what’s on the “official” TBR list for March? Well, since I went so crazy on comics for February, I thought I’d move into a few actual novels for March (wish me luck). Starting out, since I’ve been experiencing a lovely bout of writer’s block, I thought I’d finally get around to checking out Stephen King’s “On Writing: A Memoir of the Craft“. As one of my all-time favorite authors, and the man who inspired me to write and publish a horror novel, I expect that he may have a few things to say that will be helpful to me in my forward journey toward continual writing. Maybe he’ll even help to teach me not to write ridiculous-sounding sentences like that last one! We can only hope!

Once I’ve picked Mr King’s brain and (hopefully) chiseled my way through that writer’s block, I thought I’d finally get around to reading “Winter“, the fourth and final chapter in Marissa Meyer’s “The Lunar Chronicles” series (excluding the standalone, “Fairest“). I fell in love with the series when I picked up “Cinder” on a whim and found out that it was practically nothing like what I was imagining, and I blew through the first three books in record time. Right around that time, however, I got hung up with a number of things and never managed to find the time to finish up the series with “Winter“. I think it’s about time I rectify that situation!

So those are my upcoming reads for March! Do you have a TBR list? Have you read any of the books on my list? Feel free to share in the comments!